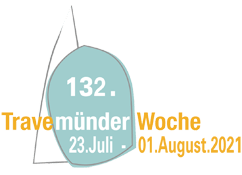 It took some time. But we have the information for camping in Travemunde.

We are situated directly at the channel on the north side.
The boatparking - launching area is directly at the channel. We need to cross the boulevard but that is only meters.
There are 2 areas for camping. One is for tents and is only 100 meter from the launchingarea. There will be toilet and shower facillities on the area.
The other one is for Campers and caravans and is only 50 meters from the launching area. It is a part of the carparking with a tree area between the camping and boatparking.
There will be toilets and showers placed directly next to the area.

You see 2 pictures. One is from the south side including all Travemunde organisation
The other one is a top view

Prices for as far as known on this moment is 18 euro per night.
Minimum price will be 6 euro per night
We asked for a bit more explanation if this is per camper / caravan  / tent.
The ribparking is mentioned but not yet confirmed.
As soon as we receive more information we will update this information.

We've made a form to subscribe for the camping areas so we can help the organisation in Travemunde with info on Splash.